String instruments are so versatile you can hear them in every musical era and genre of music – even classical music! And today, we’re taking a closer look at some of the most common ones. Here is the string instruments list you should know about.

What Is a String Instrument?

A string instrument is a type of instrument that feature soundboxes, resonators, and strings. The body of the instrument is typically hollow so that it can amplify the sound of the strings. Its material is predominantly wood because of tonal qualities and tradition (early musicians use wood because it’s more readily available than plastic or metal.

A musician can play a string instrument using his fingers, a plectrum, or a box to vibrate the strings.

Fun fact: The strings are usually nylon or steel, but some are made from gut.

What Instruments Are in the String Family?

Some instruments in the string family include guitars, violins, and cellos. In this group, you’ll also find the ukulele, lyre, mandolin, lute, and oud.

First on our string instruments list is the violin.

This string instrument’s history dates back to 16th-century Italy. Most scholars credit lute builder Andrea Amati of Cremona as the inventor. However, the exact creator is still unknown.

This string instrument, also referred to as a fiddle, is known for its hollow wooden body and high-pitched sound. Of course, it is also famous for how it is played. When playing the violin, you’ll need to use your chin to hold it in position. Using your right or left hand, you’ll glide the bow across the strings while your other hand holds the neck. You’ll need to press the strings as you move the bow to create varying sounds.

Drawing the bow over the strings is not the only way you can create a sound. Other musicians pluck the strings (pizzicato), while others use the bow’s wooden side to strike the strings (col legno).

The viola is the larger counterpart of the violin – 1″ to 4″ larger, to be more precise. Since it is bigger, it doesn’t have the iconic high pitch sound of violins. Instead, it registers a lower and deeper range. As a matter of fact, musicians and scholars consider the viola as the alto voice or the middle ground between a violin and the cello. Like a violin, you can play the viola by bower or plucking.

Fun fact: Viola, cello, double bass and the violin are part of the violin family.

Cellos feature strings tuned in perfect fifths, making them the lowest-toned stringed member in an orchestra. Naturally, its music is written in the bass clef but sometimes has passages from higher. You can play the cello using a bow, but like the violin and viola, you can pluck or hit the strings to produce a sound. In addition, their endpin is similar to the double bass resting on the floor.

Fun fact: Out of the string instruments list, the cello has the closest human voice-like tone. And, it’s not unusual for an orchestra to have up to 8 cellos!

The double bass is a noteworthy stringed instrument because it’s the only bowed instrument with a fourth-based tuning. It is also the largest, measuring about 6-feet from the endpin to the scroll.

Musicians typically use an arco or bow along the strings to play musical pieces. Nevertheless, some will use a pizzicato playing style, especially during staccato sections. Classical players also often employ a fortissimo dynamic, creating dark, heavy tones. Originally,

Also included in our string instruments list is the harp. It is a plucked string instrument with several strings running at an angle to the soundboard. The harp is divided into two main types – lever and pedal.

Lever harps have sharping levers (a mechanism that allows you to raise the pitch of the strings) on top. On the other hand, a pedal harp, as its name suggests, features a pedal at the base that you step on to change the notes. For classical music, musicians typically play the pedal harp.

A string instruments list wouldn’t be complete with the banjo. This stringed instrument is known for its long neck body and round head. Unlike other stringed instruments, banjos feature a stretched thin membrane or parchment on their circular body. Think of it like a tambourine but with a neck and strings. Banjos are common in folk music.

A typical mandolin has four sets of doubled strings, totaling eight overall. The Neapolitan, arch-top, and flat-backed styles are the most widespread, although more exist. Classical European songs implement Neapolitan versions, while bluegrass uses arch-top ones. Its body amplifies sounds produced by strings, acting as a resonator. Tremolo picking compensates for the instrument’s fast note decay, so it is used in tons of songs.

Portuguese luthiers invented the ukulele, but Hawaiians popularized it later on. Tone and volume vary with the instrument’s size and construction, and there are four sizes – soprano, concert, tenor, and baritone. They resemble small acoustic guitars, having a figure-eight body in terms of shape.

This group will comprise a substantial entry on our stringed instrument list. Guitars represent a broad range of fretted instruments usually made with six strings. When played, it rests flat against the player’s stomach, and they strum with the dominant hand.

Electric guitars have either magnetic pickups or piezo pickups. These components are responsible for converting the vibration from the strings into an electric current. Without them, you won’t hear any sound from an electric guitar. This is also the reason why you’ll find an electric guitar hooked up to an external amplifier.

You can find electric guitars in many genres, but they are more common in punk rock, heavy metal, alternative rock, and even blues.

Classical guitars or Spanish guitars are the precursors to today’s acoustic and electric guitars. It doesn’t have any pickups or requires any other component to produce sound. So, what’s the difference between an acoustic and a classical guitar? The latter uses nylon strings, creating a softer and follower sound. Other differences include a thicker and wider neck and a wrap-around bridge.

Acoustic guitars evolved from classical-style guitars popular during the 19th century. They transmit sound by vibrating strings, generating noise in the body. The guitar’s hollow shape resonates with the sound, increasing its volume substantially. Strings may be struck one at a time, or a player can strum them all to create chords. Furthermore, the wood used to make an acoustic guitar’s soundboard influences its timbre.

Beginning in the 1950s, the bass guitar began replacing the double bass in popular music. A luthier usually adds four strings to the bass guitar’s body, but there are five-string models. Electronic pickups are installed beneath the strings and mounted on the body.

When played, electronic signals transmit through these and into an amplifier, creating sound. Paul Tutmarc of Seattle introduced the world’s first electric bass in the 1930s. Prior to his introduction, the double bass was standard in the most popular music. Audiovox sold a 30.5-inch model in their 1935 catalog, and it had a single pickup in the body. In total, they produced around 100 during this time.

A sitar’s design can incorporate 18, 19, 20, or 21 strings. Interestingly, six or seven of these strings must run over curved, raised frets. Sympathetic strings compose the remainder, running beneath the frets and resonating in sympathy.

Lutes encompass any plucked string instrument with a neck, round back, and an enclosed cavity. Sometimes, they do not possess frets, but some of them are fretted. Consequently, ebony is a frequent choice for the veneer when making the fretboard.

Since the neck is a light wood, this adds strength, stability, and durability. On the other, its tuning pegs are hardwood, tapering toward the ends. Its popularity peaked during the middle ages in Europe but was revived in the early 1900s.

Several ethnic instruments are on this stringed instrument list. Ouds are short-neck lutes with pear-shaped bodies, completely lacking frets. In many cases, they have been built with 11 strings grouped in six courses.

Nonetheless, some choices have featured five or seven courses, and up to 13 strings can be used. Playing styles usually require a plectrum, but some players strum without them. It is symptomatic of Arabic music and is equivalent to the European lute during the same era.

Hammered dulcimers are hybrid percussion-stringed instruments. Dulcimer makers stretch strings across a trapezoidal resonant soundboard. If you want to play this stringed instrument, you will need to strike a small hammer or mallet to its strings.

Traditionally, a dulcimer’s design has incorporated two bridges, coming in various sizes. A 15/14 will use 15 strings to cover the treble bridge and 14 to cross the bass bridge.

Other string instruments Include: 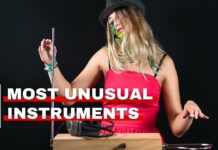 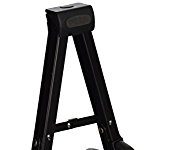 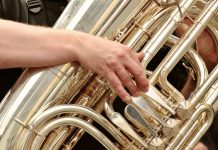 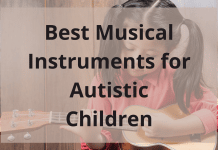